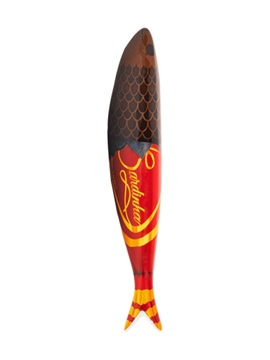 The combination of two flavors immediately associated with Portugal. One of them is the sardine (present in multiple national festivities, such as those honoring Popular Saints) and another iconic flavor: that of childhood chocolates, bought in corner shops and displayed in punch hole boxes. Designer: Maria Beatriz Soares
$55.00 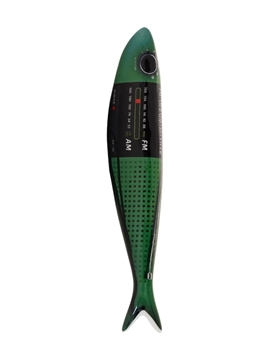 This sardine wished to pay homage to the old school “battery radio”, so typical of Lisbon's neighborhoods, where through the windows one could hear, on a short-wave radio, the radio soap opera, Fado and football reports, which gave so many joys and sorrows to the people who listened to them. You did it! Designer: Luís Barata
$55.00 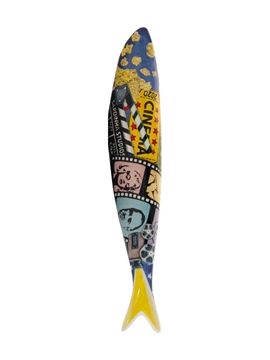 Now here's a real movie star! In this year when the 125th anniversary of the first session of that filmmaker in Paris is being celebrated, this most famous sardine evokes the magic that celluloid film lets project. Cinema is celebrated with icons, with popcorn and with Hollywood. Designer: Mário Augusto
$55.00 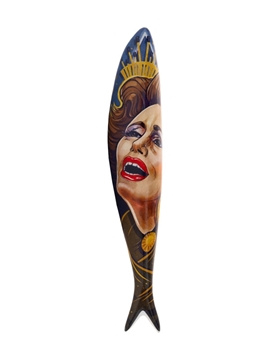 All that matters is feeling Fado. Because Fado doesn't sing, it happens. Fado feels, it doesn't understand, it doesn't explain. 2020 marks 100 years since the birth of the greatest figure in Portuguese Fado, and one of the greatest voices the world has ever known. And what a voice! Congratulations Amália! Designer: Ana Gomes
$55.00 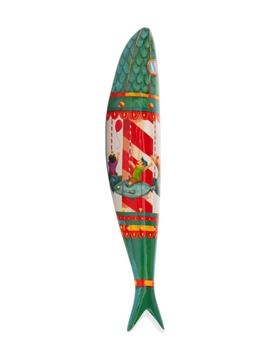 Let's go, people! One more ride on the Sardine Carousel! This represents the essence of the fun of countless hours spent at fairs and on carousels, these unique and outlandish machines that have the particularity of turning even the grumpiest of adults into cheeky and lively children. Designer: Daniel Souto
$55.00 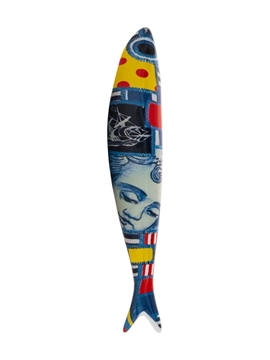 Different scraps of cloth have been brought together, in the best “patchwork” style and, after a careful transformation at Bordallo Pinheiro; they have been turned into a ceramic quilted-sardine, ready to decorate and to make any corner of your home a bit more cozy. Designer: Ana Araújo
$55.00 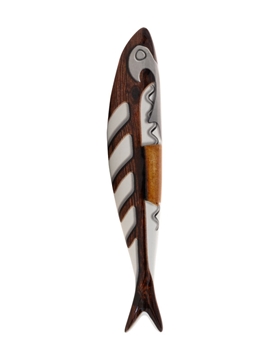 This sardine that is always partying, as its name indicates, invokes special and fun occasions that merge with the spirit of the celebrations in Lisbon. Surrealistic in nature, it is dressed in mahogany wood and wears a metal mask. It is known for being a great wine lover, which makes it a must at any Portuguese table. Designer: Carla Freire
$55.00 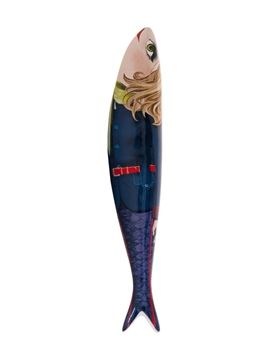 Happy and adventurous, since she was a little girl she dreamed of seeing the world. She was told, “You always have your head in the clouds,” but she knew what she wanted. Today, she flies to several continents, welcoming passengers from all over the world with a smile on her lips: “Welcome on board!” This sardine pays homage to all professionals in civil aviation and also to 75 years of TAP. Congratulations! Designer: TAP
$55.00 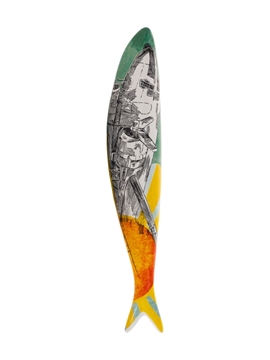 My name is Douglas DC-3, but I prefer to be called Dakota. I'm a classic of aviation, twin-engine, propeller driven. I was a pioneer at TAP and from the 1940s I connected Lisbon to Angola and Mozambique transporting passengers in comfort and safety. I am currently in the Air Museum. In the form of a sardine, I now honor the 75 years of the Portuguese airlines. Congratulations! Designer: TAP
$55.00 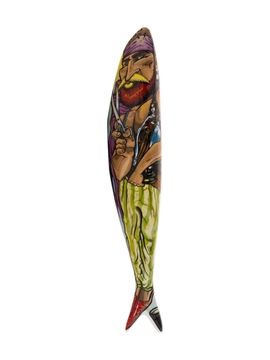 This sardine wanted to “change its life” and dress up as the man who said “I'm going to be a singer” and who became much more than that. It left at the crack of dawn of Saint António and became Saint António das Variações on its own. With his barber's scissors, the slippers for going out into the street and Saint Teresinha to protect him from harm, he sang... “Adeus que me vou embora” [“Goodbye I'm going away”], taken to the heavens by the limelight. Designer: Ricardo Almeida
$49.00 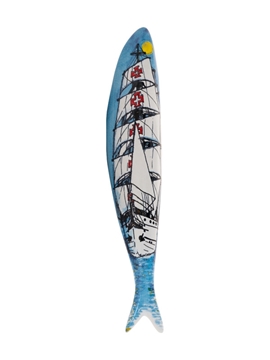 This Sardine mounted masts and sails and decided to go even further and with more steam, like the Portuguese ship “Sagres”! The sea is her vocation, but the house that welcomes her is her destiny. Designer: Salvatore Seidita
$55.00 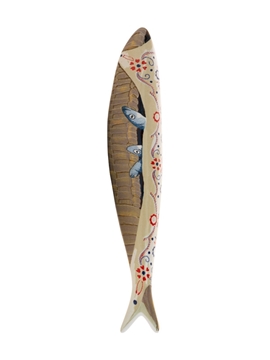 In the time when fishmongers sold what they carried in their baskets, surely everything was valued and in sustainable quantities. The product was always covered with a beautiful cloth of Portuguese embroidery! Long live local tradition! Designer: Raquel Marto
$55.00