Mariza, the great ambassador of music sung in Portuguese, is recognized by the international press as one of the best voices of all times.
She has collected distinctions and awards all over the world, recently distinguished with the title of Master of Mediterranean Music by the North American University Berkley College of Music; she won the Luso-Spanish Art and Culture Award; according to Marktest she is the favourite artist of the Portuguese and with the greatest influence in the digital world; and the magazine Executive names her as one of the most influential women in Portugal.
Constantly touring the world, Mariza is a regular presence in the most important venues such as The London Royal Albert Hall, The Sydney Opera House and the Los Angeles Hollywood Bowl. Today she is a universal artist capable of opening herself up to the world without losing the intense awareness of her Portuguese identity. And the Portuguese public is the first to recognize her triumph and to pay her back with unlimited love and gratitude. 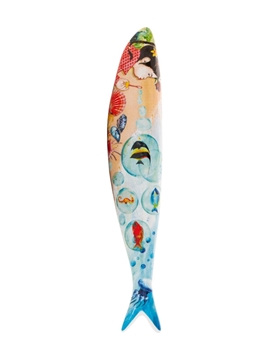 It is difficult to think of Portugal without associating it with the sea. It is an extension of Portugal, of our existence and history. It is where everything begins and ends, but it also gives haven to tranquility and to imagining of the future which contrasts with the force of the ocean that embraces us, that motivates us to build bridges, to break the restlessness of the present and to look forward to the dawn. A beautiful tribute of Mariza. Designer: Mariza
$55.00