Henrique Sá Pessoa was born in 1976 in Oeiras. It was on an exchange program in the USA that he discovered a love for cooking. He has worked in London and Sydney, and returned to Portugal in 2005, where he received the “Chef of the year” award. He has produced several TV programs, published several books, and opened the restaurants Alma, Cais da Pedra and Henrique Sá Pessoa, in the Mercado da Ribeira, in Lisbon. He reopened the Alma restaurant, in Lisbon’s Chiado, and it already has two Michelin stars. 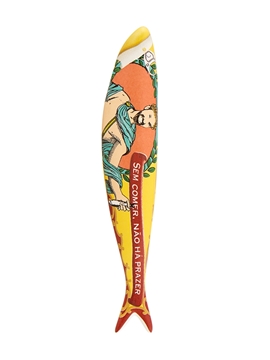 This sardine is inspired by the famous and iconic Portuguese canned goods, appreciated worldwide, like our popular sayings, with a little comedy thrown in. Designer: Henrique Sá Pessoa
$49.00