Born in Bissau in 1972, he is a comedian, an actor and a writer. Pioneer of Stand-up Comedy in Portugal, he began working as a writer in Produções Fictícias. He played theatre and participated in projects such as “Os Contemporâneos” (RTP), “Clube de Comédia” (WOW), “O Paradoxo da Tangência” (CanalQ), and the multi-award winning “Estado de Graça” (RTP); he was actor and author of “Anticrise” (RTP), nominated in 2012 for Best Television Show. The comedian was also nominated for Best Actor/Comedian. In 2014, he premiered the play “Tiro e Queda” and, since 2015, he has been on RTP with “Donos Disto Tudo” and is “Indignado Osório”, at 5 Para a Meia-Noite (RTP). In May 2019, he wrote and starred in his own program “Patrulha da Noite” on RTP1, which repeated its success during the second season in 2020. 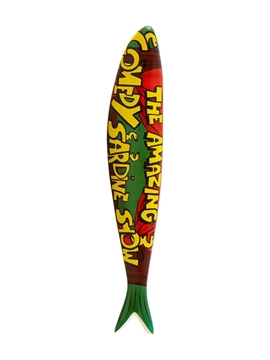 If she is queen at the table, let an ovation for the sardine come out. Designer: Eduardo Madeira
$49.00