He was born on 1965 in La Habana, Cuba. He has been living in Mexico, where he works as an editorial caricaturist of the daily “EL UNIVERSAL” and in several international publications.

He graduated professor of Fine Arts in La Habana. Founder of the CARTONCLUB (Club of the Latin cartoon), he participates in several international groups of caricature and art. He works on all the branches of the graphic humor and he obtained more than 150 international awards and endorsements. 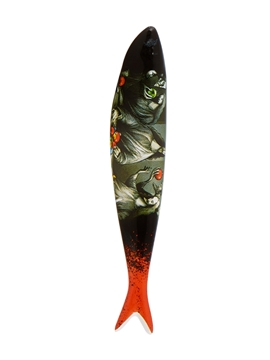 With the table full of symbols of a commercial Christmas, we turn the Last Supper into a colorful party. A warning about the unbridled consumerism pervading society. Designer: World Press Cartoon / Boligan
$49.00