During a creative phase deeply marked by naturalism, Raphael Bordallo Pinheiro put forth a wide variety of ceramic items portraying fish and shellfish.

Also a lover of good food, he frequently got together with friends for gourmet dinners at the Leão de Ouro brasserie and the Grupo dos Macavencos, at Palácio Foz, in Lisbon, or when he was in Caldas da Rainha and visited Francisco Grandela at his home in Foz do Arelho, surrounded by a beautiful marine scenery.

The clam is a bivalve that includes many species. It has a shell that can vary from light gray to dark brown or display cream, brown or greyish hues, with striations and well-marked lines, presenting a characteristic lattice pattern. This mollusc lives on the sea bottom, near the coast, or on riverbeds and lagoons, buried in sand or mud. It feeds through filtration, with a diet of microalgae carried by currents, captured through a tubelike structure or siphon. It reproduces in summer.
$29.00

The cockle is a filtering bivalve mollusc that lives buried at a depth of about 5 centimetres in sand or mud, where it feeds by filtering the phytoplankton from the water. When threatened, it can quickly burrow deeper by the retraction of the foot that keeps it anchored, which manoeuvre sometimes sallows cockles to escape predators. Cockles are very common and up to 10,000 animals per square meter can be found. Because of its high tolerance to low salinity environments, it is also frequently found in estuaries.
$33.00

The blackbelly rosefish has a reddish back and pink and whitish hues in the belly. Its body is robust, with big, bulgy eyes and distinctive spines. It is found in the northeast Atlantic and in the archipelagos of Madeira and the Azores, where it lives close to the seabed, from 200 to 1000 meters deep, often dwelling in marine wrecks. It is a solitary species that only gathers in summer, for reproduction. It feeds on fish and crustaceans during the day, with a period of inactivity at nighttime.
$94.00 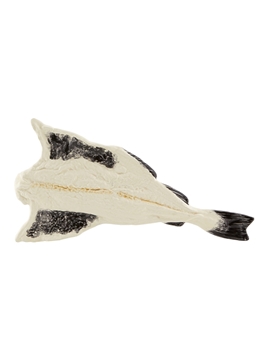 Codfish lives in the icy waters of the North Atlantic and the Arctic. For centuries, these waters were sailed mostly by Portuguese fishing boats, which came back home carrying tons of cod already cleaned and salted. Codfish is large and can reach an average of 1,2 meters in length and 40 kilos in weight. The species is very voracious, devouring everything that moves around them. Its diet is extremely varied, including marine organisms such as fish, squid, crustaceans and other molluscs. It lives in large shoals, sometimes formed by thousands of individuals.
$127.00

Crabs are crustaceans that can also survive out of water. Their flat bodies are covered by a hard shell that provides protection. They have long, thin legs that allow them to walk under water, swim and dig. The claws, used to attack and to catch prey, are their first pair of legs. The antennae have several functions, including as sensory organs, allowing them to find food. The protruding eyes can retreat inside the shell for added security. The crab is a nocturnal animal, which usually spends the day hidden between rocks and coral.
$132.00

The horse mackerel has an elongated, gray body with blue hues on the back and silver shades on the belly and sides. It lives in the northeast Atlantic, the Madeira Archipelago and the Mediterranean Sea, where it can be found from the surface to the bottom of the sea, in coastal areas between 100 to 200 meters deep. It forms large shoals that undertake substantive migrations, feeding on small fish, crustaceans and molluscs. It reproduces from December to April. Other names for the horse mackerel include scad, saurel and European horse mackerel.
$108.00 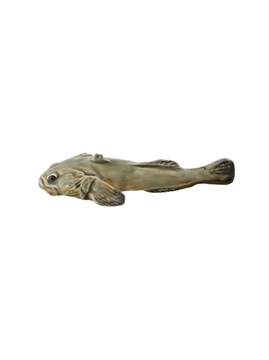 The Lusitanian toadfish has a greenish-brown colour and feeds on crabs and small fish. It is a solitary animal that emits a variety of sounds and normally dwells on soft sand or mud or in crevices. It can live up to 10 years. Its body is deprived of scales and the eyes are located on the top of the head. The Lusitanian toadfish is a brackish water species, whose male specimens can grow to a length of 50 centimetres.
$138.00 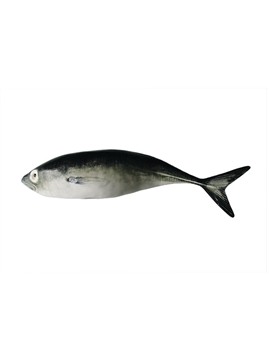 The jack mackerel is quite common in the Atlantic Ocean and throughout the Mediterranean. This species is normally found in big shoals all along the Portuguese coast, at moderate depths, feeding on small crustaceans, fish and molluscs. The jack mackerel undertakes considerable migrations and reproduces between December and April.
$95.00 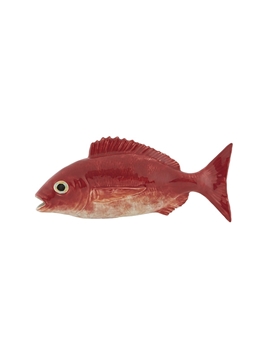 The blackspot seabream has reddish hues and a black spot on the head. The inside of its mouth is peculiarly orange-red. It is found in the northeast Atlantic, where adults dwell close to the sea bottom, up to 700 meters deep. Young blackspot seabream live in schools closer to costal zones. It feeds on small fish, crustaceans and molluscs. The species reproduces during summer and fall.
$138.00 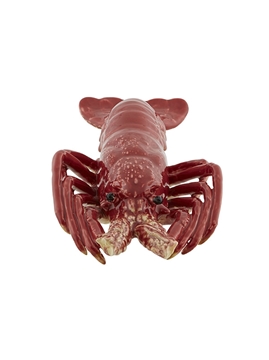 The lobster, with its characteristic antennae and claws, is a crustacean with a body that can reach up to 50 centimetres in length, covered by a thick prickly shell. It likes rocky areas and places with marine vegetation, as long as there are plenty of molluscs to feed on. During the day, lobsters hide in crevices or among algae. At night-time, they go out in search for food, returning to their shelter in the morning. When threatened, the lobster moves quickly by hunching its back, with the tail wide open, and keeping the legs and antennae facing forward. It dwells between 70 and 200 meters deep, normally moving closer to coastal areas during breeding season.
$391.00 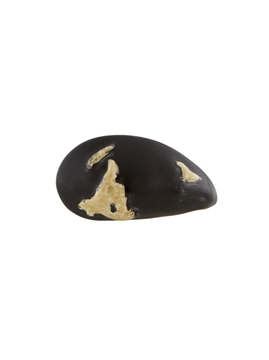 The mussel is a bivalve mollusc with a black, oval shell, which allows it to attach to other organisms. It is found in the northeast Atlantic and the Portuguese coast, in estuaries and oceanic habitats, living in rocky intertidal areas, up to 10 meters deep. It attaches to rocks in large clumps by way of a structure called byssus, feeding of phytoplankton and other organic particles through filtration.
$33.00

Juvenile red porgy are usually found in shallow, sheltered areas, alter migrating to deeper waters. Adult red porgy mainly live between 50 and 150 meters deep. Fish of this species can however be found up to 250 meters deep. Red porgy gather in schools and the largest fish can weigh up to eight kilos. These specimens are only found far from the shore, in deeper waters.
$116.00 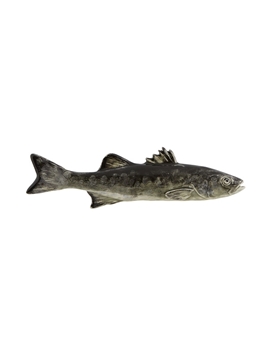 The sea bass has an elongated silvery gray body with blue hues. It dwells in the northeast Atlantic and the Mediterranean Sea, where young sea bass can be found in shoals near estuaries, due to this species easy adaptation to low-salinity waters. Adult sea bass dwell in waters up to 100 meters deep, living a more solitary life. This species feeds on fish, crustaceans and molluscs. It reproduces from January to April.
$108.00

The tub gurnard is a species that reproduces on Portuguese shores at considerable depths. It feeds on small molluscs, rustaceans and some fish species. It is orange-red in colour, with ridges and bony plaques on the head and along the back. The pectoral fins are very large, resembling wings. The tub gurnard prefers cold, deep waters, where it normally lives, weighing at most between eight and 10 kilos.
$314.00 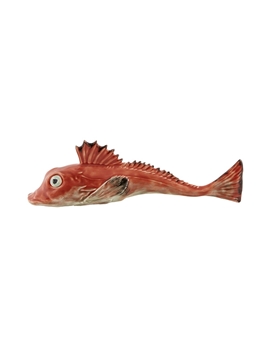 The striped red mullet is a small reddish fish. It can be found in the northeast Atlantic and the Mediterranean, where it dwells at the bottom of the sea, up to 100 meters deep. This species forms shoals and feeds on crustaceans, small molluscs and fish. It reproduces from late winter to early summer. Juvenile striped red mullets live closer to the surface, only moving to deeper waters once they’ve matured into adulthood. Their two chin barbels contain chemosensory organs and are used to probe the sand for food.
$87.00 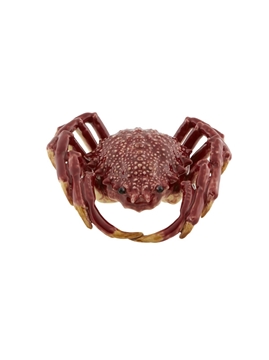 The spider crab has a rounded convex reddish or yellowish brown carapace with numerous small spines. It is often covered with algae and anemones, enabling it to blend with the surroundings. It is found in the northeast Atlantic, in the Archipelago of the Azores and the Mediterranean Sea, dwelling in sandy and rocky bottoms, in waters 10 to 150 meters deep. It feeds on what it can find at the bottom, including algae and small bivalves. It reproduces from May to July. Female spider crabs mate after moulting, becoming more vulnerable to predators, which is why males of the species form a protective barrier around them.
$259.00

The edible crab has a robust shell, wider than it is long, with a reddish-brown colour and two strong claws with black tips. It is found in the northeast Atlantic and the Mediterranean Sea, where it dwells in shallower waters for the first six months of its life. It then moves to deeper areas, up to 100 meters, including in lagoons and estuaries. The edible crab feeds essentially on crustaceans and bivalves, which it captures and kills by squeezing them with its claws. It reproduces during spring and summer, after females shed their shells. Female edible crabs carry up to 3 million eggs in their abdomen for six months, during which time they remains hidden under rocks or buried in holes they dig.
$347.00