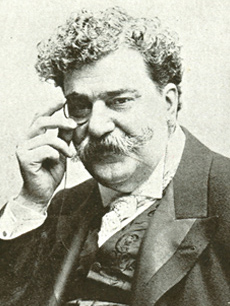 Raphael Bordallo Pinheiro is one of the most influential people of nineteenth century Portuguese culture, with a remarkable production particularly regarding the areas of humoristic drawing, caricature and ceramic creation. His work represents an unsettling, ever timely reality and a fundamental document for political, social, cultural and ideological study of a time period.

Raphael Bordallo Pinheiro will forever be intimately associated with caricature and artistic ceramics, showing quality and important pieces never seen before, and which, in the opinion of renowned modern artists, are the work of a genius.

Since an early age he was interested in art, and he even attended the Belas Artes school. As he was a keen theatre goer, this was how he started publishing his humorous newspapers, achieving great success with some of them. The newspapers become precious documents for their artistic quality as well  as their interpretation of the political and social events of the time, newspapers "Antonio Maria", " Pontos nos ii " and " A Paródia "  being some of the examples.

He became famous as well for his popular images, such as Zé Povinho (an image representing poor and oppressed people represented in various ways), Maria da Paciência (Patient Mary), Ama das Caldas (Nanny from Caldas), the policeman, the priest taking snuff, the sacristan with the censer in hand, and many others. Bordallo Pinheiro held exhibitions in Brazil, in Rio de Janeiro and São Paulo, where he presented the majestic Jarra Beethoven (Beethoven jar).

His remarkable work with ceramics was awarded with the gold medal in international exhibitions (Madrid, Antwerp, Paris and in St. Louis, United States).

Raphael also followed the unique architectural design of the facilities which included an area for a ceramic school, where several related courses were taught. The factory and the sales warehouse were surrounded by a park with trees, two springs, two clay pits and it was decorated with Raphael Bordallo Pinheiro’s own ceramic pieces.

At Raphael Bordallo Pinheiro’s factory were created hundreds of ceramic models of unparalleled creativity, based on local traditions particularly Caldas’ pottery, adopting the fauna and flora as decorative inspiration. His ceramic production became well known, especially for its artistic quality, both at a national and international level.

Bordallo modelled, as well, characters based on the Portuguese everyday life with remarkable boldness and critical sense, and in his tiles he created patterns with diverse influences as vast as Renaissance, Naturalism, Art Nouveau and the Spanish and Arab legacy.

Raphael Bordallo Pinheiro with the help of his workers produced bold pieces, either by their size or by the delicacy of the details. The "Jarra Beethoven", which exceeds 2.60m in height, is a symbol of exuberance and talent of the artist, and it is exhibited in the Museu das Belas Artes in Rio de Janeiro.

The twenty-one years of Raphael Bordallo Pinheiro (1884-1905) production became immortalized in the history of Caldas’ ceramics. This was achieved not only by the exuberance and creativity of his ceramic pieces, but also by the high technical level achieved, mainly regarding modelling and glazing.

After the death of Manuel Gustavo in 1920, a group of distinguished people from Caldas, together with the workers, continued the company’s work. After the serious crisis of 2008, the company was purchased by Grupo Visabeira which ensures a productive and historical continuity. 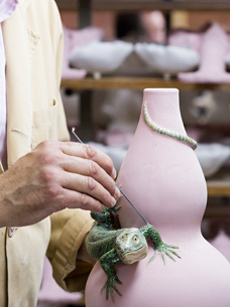 Adopting a modern and entrepreneurial approach, Bordallo Pinheiro plays an essential role in the revitalization of Portuguese ceramics and of the artistic heritage of its factory, Fábrica de Faianças Artísticas, Raphael Bordallo Pinheiro, in the national as well as the international scene.

Bordallo Pinheiro remains faithful to tradition through the use of ancestral manufacture techniques and the naturalistic motifs at the root of the brand’s great project. At the same time, it gives its lines a contemporaneous dimension, thanks to the excellence of its production and its continuous reinvention, both at the aesthetic and technical level.

The brand’s utilitarian and decorative pieces continue to feed our collective imagination and to take the prestige of Portuguese culture and industry one step further.